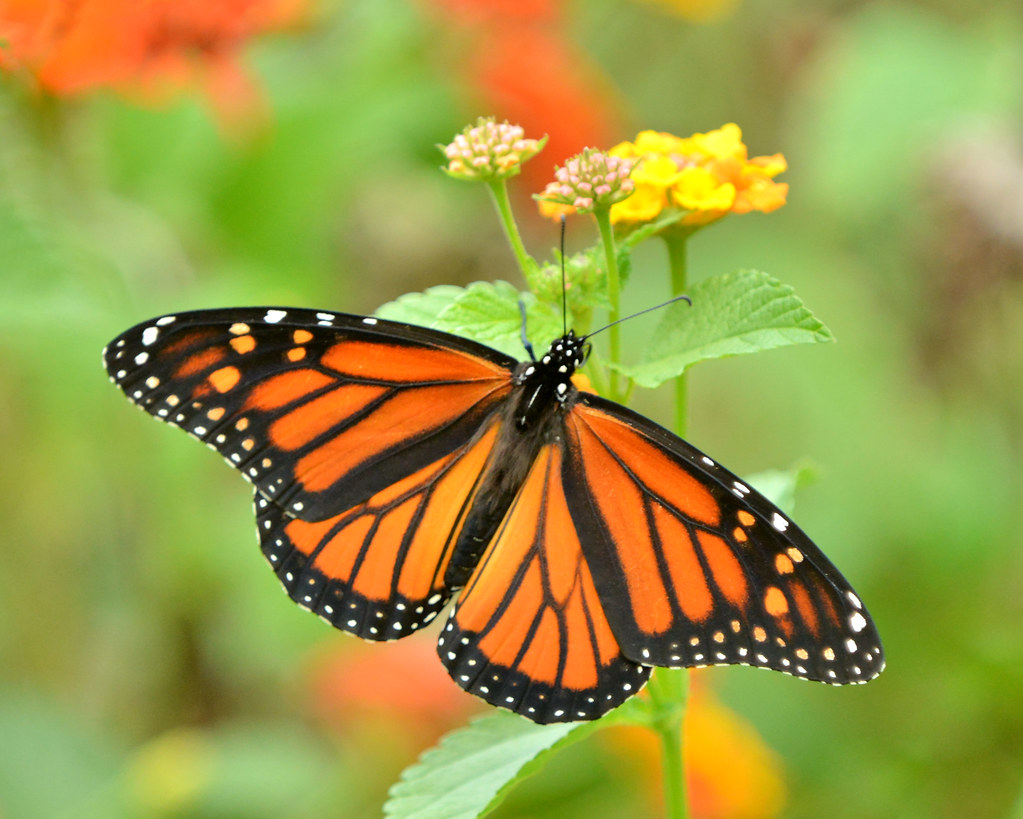 Most of the butterflies in this final generation begin their lives in the northern US or southern Canada, and then migrate thousands of kilometers to mountaintops that neither they nor their parents and likely their grandparents have ever seen before.

After spending several months in Mexico they return north beginning in March, starting the cycle again as they lay eggs in northern Mexico and the southern US. Their parents, grandparents, and great-grandparents have very different lives. These summer monarchs live only about a month as adults and begin laying eggs when they are only a few days old.

In most years, the total number of monarchs probably increases with each generation. Because the winter generation must live for such a long time before reproducing, the entire population shrinks as some of these individuals die during the fall migration and overwintering period. The population then grows over the spring and summer.

Information for the following pages on monarch migration are taken from papers by S.

Malcolm, B. Cockrell, and L. Monarchs in Generation 1 are the offspring of the monarchs that overwinter. They are laid from late March through April in the southern United States and northern Mexico, and fly north as adults. They do not undergo reproductive diapause.

The first monarch generation of the year begins when females that have spent the winter in Mexico lay eggs in northern Mexico and the southern U. The last eggs are laid in late April or early May, farther north. Since it is often cool when Generation 1 larvae are developing, it may take them up to 40 or 50 days, or even more, to develop from eggs to adults. Generation 1 adults emerge from late April to early June. They mate and begin to lay eggs about four days after emerging, and continue the journey north that their parents began, laying eggs along the way.


They begin to arrive in the northern US and southern Canada in late May. Monarchs in Generation 2 are the grandchildren of the overwintering monarchs.

10 Things You Might Not Know about Fall’s Annual Monarch Migration? 🤔

They are laid throughout much of eastern North America from late April through June. Those laid in the southern part of their range continue to migrate north. Generation 2 larvae are widely distributed throughout the eastern United States, first beginning to appear in the south in early May, and in the north in mid to late May. Reports on citizen science platforms such as Journey North , iNaturalist , and the DPLEX list , a monarch-butterfly email list operated by the University of Kansas, have been optimistic about high monarch numbers in the Midwestern breeding grounds all summer.

Yet unfavorable conditions in Texas could have a negative impact on the migration.

Throughout September, reports from Canada, Maine, and into the Midwest have touted large numbers of monarchs. Monarch butterflies start their migration in Mexico, often laying their first round of eggs in Texas.


Multiple generations move north over the summer all the way to Canada, then return south in the fall, moving through the Texas Funnel en route back to Mexico. But as Davis and others have pointed out, much can happen between now and the time the butterflies arrive at their destination in Mexico, typically about three weeks from now. Wildfires, hurricanes, a lack of nectar in Texas and northern Mexico, and pesticide applications pose myriad hazards to the migrating insects and could derail what appears to be a banner year.

In the Texas Funnel, the migratory corridor through which all migrating monarchs must pass on their way to Mexico, widespread drought has been interrupted by spotty, occasional thunderstorms during summer and into the fall.